I’ll never complain about my paying my taxes ever again; the NHS is worth every penny!

On Friday morning I woke up with mild stomach pain, which I simply put down to having earlier seen my pay slip and the fact that 50% of my salary had disappeared in taxes…

I headed for the office wondering if I should start finding ways to minimise my tax, but instead turned my thoughts to the important presentation that I was working on and the exciting day ahead in the office.

My stomach continued to feel funny, and by lunchtime I was experiencing a little dizziness – not something that has ever happened to me before; by the time I had my last meeting of day, I knew that I had to visit A&E.

I went to University College London Hospital on the Euston road and told the receptionist my symptoms before taking a seat.

She was cheerful and friendly despite the A&E room resembling a war zone (the people, not the facilities) and having to work late on a Friday night.

I was seen by the triage nurse a few minutes later, and she booked me in. After taking my pulse, she decided that something more serious than indigestion was afoot.

I sat for a couple of hours in A&E with an assortment of interesting characters; it was a busy Friday night in the West End!

First, was a friendly drunk who looked like he’d been in the wars and had dropped off by some anonymous teenagers who had found him nearby in the street. Dripping blood and reeking of alcohol, he had no idea where he was, but seemed quite happy to be there.

Next was a cheerful East European chap who had come in with heart palpitations, but he didn’t seem overly concerned, and the medics had got him an ECG pretty quick, establishing that he wasn’t about to keel over. Unfortunately, the heavy-set drunk chap took a liking to him and fell asleep in the seat next to him before slumping on to him, pinning him to his chair.

Third was an American financier who had fallen off his bike and basically destroyed his left wrist and busted his right elbow. He was in good spirits, partly because of the painkillers, I’m guessing – but he was coping well with the pain. Apparently, he had been thrown several feet into the air before crashing into the ground, his arms and wrists taking the brunt of his fall. Miraculously, his glasses survived and I helped him to put them on so that he could check his phone.

Shortly afterwards, it was my turn to get checked out by a young, tall, charming doctor (Dr. Charming – perhaps from the midlands?), who explained that he was a big fan of my company’s products while giving me a (very!) thorough examination. A delightful and extremely smiley, pretty south Asian nurse (Nurse Cheerful) helped me get into a medical gown and reassured me that I was in good hands while the doctor checked the results of my blood tests.

He quickly decided that my condition was potentially serious, got Nurse Cheerful to put me on a drip and I was asked to lie on the bed ready to be x-rayed and waited for a short time while the very masterful sister /senior nurse (Nurse Princess) managed the large number of people coming into A&E, preventing it from turning into chaos. She was very obviously in charge, whilst remaining cheerful, but not taking any nonsense – she was reminiscent of a princess in a medieval drama; beautiful, assertive, wielding more power than rank alone would confer and the most compassionate person in the room.

While waiting for my x-ray, Nurse Princess was keeping a watchful eye over me and decided that my condition was deteriorating sufficiently that she didn’t think that I should be going home.

“You’re not looking as good as when you came in,” she said, wiping some sweat from my forehead as I started to shake.

After my x-ray, I lay on my bed in Assessment Booth 11 just outside the Nurse Station, and listened with some fascination as that delicate interplay between the nurses and doctors played out… Nurse Princesswas clear that I shouldn’t be going home, Dr. Charming wasn’t entirely sure, and she continued to press her point.

After an hour or so – and another couple of blood tests – it had been established that my HB count was down to 10.3 from the 12.0 it was when arrived, neither of which they considered consistent with my general level of health. Bad news.

After several telephone calls, Nurse Princess had convinced a Medical Fellow (a strapping chap who looked a little like Idris Elba), Dr. Bossman, to come and check me out me out properly. After another uncomfortable, thorough examination (the details of which I’ll spare you) he agreed with Nurse Princess that I should be admitted, which allowed her to lobby the hospital’s Bed Manager to find me a bed.

Dr Bossman had a commanding presence that reminded me a little of Stringer Bell in ‘The Wire” – strong and with a certain easy gravitas that meant no one questioned his authority – including me, when he said that he was going to take yet another blood sample!

I spent another hour or so being monitored by the doctors and nurses, who were not aware that my bat-like hearing allowed me to hear most of their conversation about me!

“I’m kind of worried about this chap,” whispered Dr. Charming.

“There’s no way he should be going home; I want him to monitored – you have to find him a bed!” demanded Nurse Princess.

“Why doesn’t he have a monitor on him? Get one in here, please.” commanded Dr Bossman.

Nurse Princess had identified a bed in ‘T6’ and must have placed five or six calls to ensure that it had my name on it; making it obvious that she wasn’t likely to give up easily.

Before long, Nurse Cheerful was escorting me out of A&E and to T6, with a wave and a smile from Nurse Princess as I thanked her for looking after me.

I felt kind of guilty upon arrival, because it was obvious that this immaculate ward was for people who were pretty seriously ill.

I had been allocated Bed 50, which was actually better-equipped than some airport hotels I have stayed in. Nurse Cheerful helped me to get comfortable before handing me over to a matronly Irish nurse who got me settled in the surprisingly comfortable bed.

For the next few hours I tried my best to get to sleep, but by 04:00 on Saturday morning, it was obvious that I wasn’t going to get any… not only were my arms sore from the cannulae in each of them, but the constant noise as the nurses and doctors fussed over the patients meant that peace and quiet was out of the question. 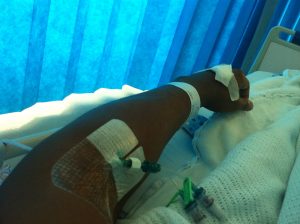 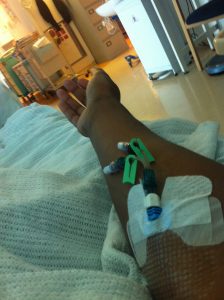 When I did eventually nod off, I was woken by a very well-spoken man saying my name:

Dr. Posh, as I will call him, had obviously read my notes carefully and quickly confirmed that Dr. Bossman was probably on the right lines, although I was not manifesting all of the symptoms that he had expected and was feeling better than the night before – with exception of being hungry as hell after not having drunk or eaten for over 18 hours.

He examined me gently, and quickly made some recommendations which another very enthusiastic young doctor (Dr. Bouncy) came to discuss with me, placing a reassuring hand on my arm as he explained the decisions that they had made and why I would be taking lots of pillsfor a few weeks.

Over the next few hours I was able to use my computer, had a particularly tasty lunch and had to give even more blood whilst monitored constantly, and attended to by a very bubbly student nurse (Nurse Bubbly) who is close to completing her degree and seemed to love her work – she is going to be a great nurse.

Unfortunately, my HB levels had dropped further, and so another doctor – an elegant, pretty and ever so slightly posh young lady (Dr. Butterfly) wanted to observe me a bit further before she would send me home, which gave me an opportunity to sample the hospital’s excellent Vegetable Moussaka!

After several more visits, Dr. Butterfly eventually decided that I could go home, but gave me clear instructions about the need for follow-up blood test at my GP and the invitation to return if I felt unwell, before departing with a beautiful smile.

In total, I spent 24 hours in the hospital, and I don’t think that I was left unmonitored for more than a few minute at any time – I felt well cared for and even a little pampered.

The staff were professional, friendly, warm, compassionate and clearly love what they do, despite the intense workload, long hours and often ungrateful patients.

On Friday morning I had been questioning exactly where my taxes go, and by Saturday night I had received a powerful demonstration of why our NHS is so important, should be cherished and is rightly celebrated by so many in this country. 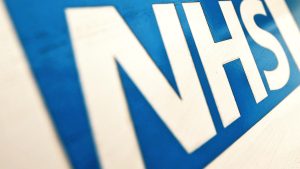 Today, I can tell you that I am proud to pay my taxes and I’ll never again question why – I love the NHS, and I’d happily paid higher taxes to protect it!

I do not believe that I could have received any better care, even if I were paying for it directly. The facilities were immaculate and beautifully designed, all of the personnel attentive and the atmosphere positive.

A sincere thanks to all of those staff who looked after me so well, and the thousands who do so for other people up and down the country every minute of the day. 🙂

One reason why @TMobile is so unique is because we truly mean it when we say come to work & #BeYou. We love learning about & celebrating all cultures & experiences. Throughout AAPI Heritage Month, I’m excited to highlight amazing team members, so stay tuned! #TeamMagenta #AAPIHM